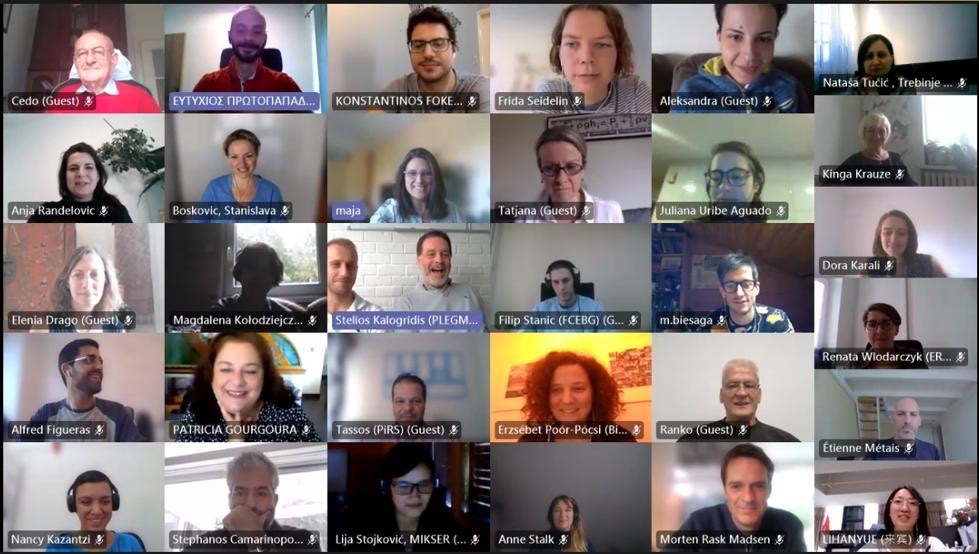 The euPOLIS project had its first annual two-day plenary meeting recently, on which the consortium partners summed up all so far progress, challenges, and future actions.

It has been concluded that, after a year of individual efforts resulting in surveys with citizens, demo-area examinations, various engagements with stakeholders and decision-makers, all future euPOLIS actions must be joint from all partners’ know-hows acquired during the so far processes, aiming to implement the unique methodology that, unlike other similar endeavors, implies the broad involvement of citizens and in-depth tackling of the urban wellbeing, and health issues.

euPOLIS is also a part of four cluster projects that include GO GREEN ROUTES; IN-HABIT and VARCITIES, funded under the H2020 “Visionary and integrated solutions to improve wellbeing and health in cities”. Besides that, euPOLIS experts are constantly making connections to other possible cluster synergies.

All the clustering activities aim to produce, and present the following results:

One of the next steps will be the development of the ICT solutions enhancing social inclusion, improving citizens’ involvement and for communication and interaction between the local community, urban and environmental professionals, artists and activists, local authorities, and media through co-creation with ICT Partners and by joining knowledge and experience towards the development of comprehensible digital solutions for personal devices (app) and improvements combining both results.

Also, to create a methodological guide of urban planning of the city, that allows the integration of NBS from a holistic point of view. To develop educative workshops (webinars) for the general public, to identify strategic alliances between academic partners, public and private institutions. Partners will also strive to develop a social and communication engagement strategy for the citizens and to identify strategic alliances with sister projects in participating countries.

Some of the preliminary issues engaging the stakeholders, concern Front-Runner and Follower cities, climate-specific NBS selection issues, as well as barriers in each FR and FL city, are mapped (for example how to integrate the existing/ongoing projects with euPOLIS’s“added value” interventions in both technical and socio-economical). The need to educate all stakeholders groups has been stressed as vital.

For example, much of the data provided by cities were obsolete and inconsistent in terms of criteria, so the euPOLIS team has to come up with the mechanisms to unify the collected data.

A thorough survey was conducted among the citizens of the demo locations in Gladsaxe, Lodz, and Piraeus, aiming to map the health and well-being challenges and point out the desired and fitting nature-based solutions to be implemented.

In Piraeus, one of the FR cities, the euPOLIS experts wanted to put together the most complete picture about the characteristics and the actual use of the demo site area in the city, so they recorded the residents and visitors profiles, opinions, preferences, and expectations regarding the potential interventions that could be planned and implemented in the area.

The experts came to the conclusion that the demo site area is of a hyper-local interest area and many visitors are using the demo site facilities for education, sports, and entertainment activities (55 percent at least three times a week).

The main kind of problems which are identified in the demo site areas and they think is necessary to change in order to build a more sustainable area within the next 20 years, are

Furthermore, the respondents for Akti Dilaveri and Microlimano demo sites think that additional cultural/athletic/eco-educational/community activities could be hosted in the demo site/case locations.

The respondents for Ralleion Pilot Complex School were asked about the necessity of planting in the schoolyards and the quality and quantity of the existing planting. All of them answered that “the presence of greenery is necessary and contributes to the improvement of the microclimate and the air quality of the schoolyard” and “it is important for children to come in contact with plants”. They think that the presence of greenery in the school contributes to the environmental awareness of the students and most of them (85%) believe that could help to improve the students’ school performance and their nutrition, too.

The community of Ralleion Pilot Complex School already recognized the wholesomeness of the existing plants and the potential NBSs to be used in environmental education programs.

euPOLIS Follower-cities have also shown palpable results in implementing the surveys and aggregate insights on the needs and expectations of the citizens in the vicinity of the demo sites.

In Trebinje’s case, during the previous period, they analyzed in detail the spatial context of case study Otok and concluded that the site is suitable for the application of NBS. After the survey, it was shown that citizens mostly see the space as a residential and business complex with sports and recreational facilities. The development of the zoning plan Otok is in progress.

After putting the preliminary draft of the plan on public view, the Trebinje team will involve citizens to give their contribution with comments and suggestions

Trebinje’s goal is to solve one of the leading problems of the subject area, and that is the floods that occur during several days of heavy rainfall due to the discharge of the reservoir of the hydroelectric power plant lake.

The plan is to create a green island that will be comfortable for the life of all citizens whether they are residents of the area or just spend time in the area. One of the goals will be to make contact with the river.

In addition to all this, Trebinje also plans two bio wastewater treatment plants for two smaller settlements called „Lastva“ and „Varina Gruda“ placed near the city of Trebinje.

In Palermo, the area of Villa Turrisi, chosen as a case study, represents a field of experimentation.

As the main goals, they aim to preserve the remaining traces of historical agricultural heritage together with the maintaining of the memory of the golden basin, to protect the animal and greenery biodiversity who are present on-site, threatened every day by building speculation, smog, and global warming effects.

Palermo’s challenge is to restore the right hydrogeological balance in the area by improving outdoor living conditions through the implementation of nature-based solutions, such as the control of the microclimate and pollution, regeneration of natural ecosystems, respecting the conditions of legitimacy.

Crucial problems at the moment are the illegal occupation of public buildings and lands, lack of security, different administrative competencies on underground water channels, and economic resources.

Reaching out for citizens

Having the participation and vast engagement of the citizens as one of the crucial pillars of the project, the euPOLIS team is putting a lot of effort into communicating and presenting all our goals and achievements to the public, using all channels at hand: the official website, and social media.

One of the first next steps to be taken will be the preparation of the first bi-annual euPOLIS magazine which will present the methodology and the scope of the project’s goals but also carry out strong motivational and engaging messages directed to experts, institutions, decision-makers, and citizens.

To achieve the full coverage of the relevant topics, innovations, and ideas, euPOLIS will form an editorial board made of experts of various fields.