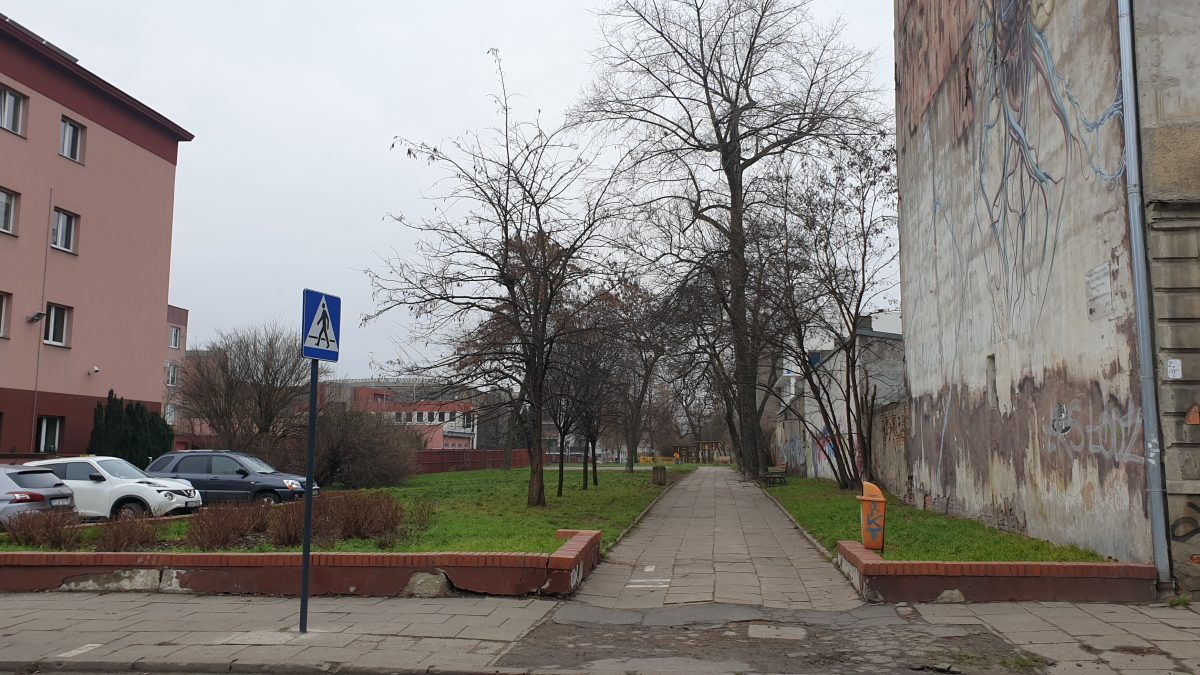 Urgent switch from dark and unfriendly, to vivid and inviting: Łódź experience

The Łódź demo location is mostly used as a shortcut to connect more active neighborhoods with higher social frequency. Even though there is a kindergarten, and a population of older people lives nearby, the furniture is rundown, and the area may seem unfriendly to most visitors, especially during nighttime.

The Łódź demo location is nowadays mostly used as a shortcut between more active neighborhoods with vibrant social life. Most of the users do not spend there more time than the daily commute requires from them. They either visit the demo location on their way to work or drop their kids at the kindergarten located there. That is because neither the presence of the kindergarten nor the fact that the area is mostly inhabited by older residents create a vivid and welcoming atmosphere. In fact, at the first glance, the demo location makes quite the opposite impression. It is dark with devastated urban furniture (i.e. old benches disfigured with graffiti) and unattended greener (i.e. trees in need of dendrologist attention and bushes asking for a trim). Moreover, the area is often occupied by people drinking alcohol in public (which is prohibited in Poland) who at times, create an unsettling atmosphere.

The concept of a linear park in the center of Łódź is based on the positive experiences of other cities that had opened urban space to the needs of residents in the past. The linear park is meant to follow a more general trend of surface growth of green areas inside cities with the simultaneous retention of rainwater. To reach both of these ambitious participatory and ecological goals the Łódź’s euPolis team asked the residents to voice their opinions regarding the current state of the linear park and their preferences about the directions the planned intervention should take.

-[…] I hope that some sensible plantings and lighting will just happen there, not concrete.

-20 minutes, there is nothing to do any longer

-15 minutes plus-minus. as long as it takes time to move on

Other respondents mention the lack of a sense of security as one of the main reasons why the passage is rarely used for relaxation. They list the need to change the lighting infrastructure as the top priority that would improve the general perception of safety in the demo location and potentially discourage troublemakers:

“As a rule, I go through this area from ul. Gdańska heading towards ul. Piotrkowska. Apart from the walkway, I don’t spend any more time there, mainly because of the suspicious company. “

The respondents also draw attention to the problem of people abusing alcohol in the area of ​​the passage, through which they usually take the shortcut, as the quality of the sidewalks in the streets surrounding the square is very low. Passers-by are in a way forced to walk through the passage, exposing themselves to unfriendly and often aggressive comments from people under the influence who occupy the benches.

“The place is not very friendly, especially when drunk men spend their time there. However, unfortunately, alternative pedestrian routes are not better, e.g. sidewalks along ul. Gdańska and ul. Zamenhofa are in a very bad condition, while on ul. Zamenhof, there is also a lot of car traffic and the company can be uninteresting. “

Subsequent questions about the assessment of such aspects as air quality, cleanliness of the air and the surrounding area, noise level, lighting, safety or temperature level, and the related amount of green areas reveal a rather pejorative perception of the passage by the surveyed inhabitants of Łódź. Collective opinions indicate that the passage is rather not a “friendly” place, there are no plantings that would reduce the temperature and noise level in this place, as well as improve the cleanliness of the air. Consequently, in the opinion of the respondents, this place is not considered to be welcoming for children or seniors. Also, the relatively poor infrastructure (mainly benches are used – 46 votes) determines the marginal interest in the passage, which mainly serves as a place for pet walks (19 votes).

When asked about their preferences in terms of the use of the passage, citizens clearly opted in favor of “greening” this area, pointing to its future eco-educational function (23 votes) and the implementation of urban agriculture (30 votes). These aspects, in turn, determine the recreational function of the arcade (31 votes) postulated by the respondents, and then the sports (19) and cultural (18) functions. The respondents see new plantings as an opportunity to reduce pollution, noise and lower the temperature, which will significantly increase the attractiveness of the area and enable the development of further possibilities of its use following the preferences of the inhabitants. The possible friendly environment prompted the respondents to develop the vision of the arcade as a kind of culture incubator:

“Exhibition of sculptures, artistic work of students of the Academy of Fine Arts”, someone proposed.

The planned changes, in the opinion of the inhabitants of Łódź, should also be aimed at reducing anti-social behavior and discouraging people whose behavior is perceived by the inhabitants as socially undesirable:

“Anything that will make it not a place that attracts alcohol abusers. I don’t know what functions deter them, but lighting and monitoring can probably help. In the past, from the side of ul. Kościuszko, the problem was prostitution, here the police should know to what extent the situation is resolved”.

People participating in the study indicated the need for new plantings of ornamental plants, trees, and water infrastructure (water jets, drinkers, fog boxes). Along with the implementation of “green” solutions, the residents also call for taking care of the sports and recreational infrastructure (benches, seats, playgrounds, and educational squares). In the opinion of the respondents, stationary and mobile food outlets, a community garden, and a stage should also appear in the arcade, which will attract the attention of the local community.